With A Sword Domain, I Can Become The Sword Saint 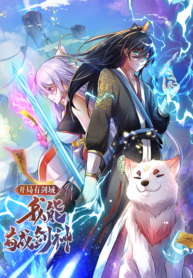 Zhang Fan, who transmigrated into another world, finally became a cultivator but was framed by others and lost all his cultivation. Just as he was about to die, the system was activated and gods, immortals, demon emperors all became nothing to him. The invincible Zhang Fan wanted to tear apart the skies with one strike, however, there was a limit to the range of his sword domain. In order to get the experience points required to increase its range, Zhang Fan had no other choice but to lure evil to himself. From then on, a new legend of him conquering gods and overpowering countless rulers appeared in the world.
Show more

Indestructible Master of The Fortress

The Entire Heavenly Court Is Against Me

When My Bloodline Was Destroyed, I Became Invincible

08/06/2022
We use cookies on our website to give you the most relevant experience by remembering your preferences and repeat visits. By clicking “Accept All”, you consent to the use of ALL the cookies. However, you may visit "Cookie Settings" to provide a controlled consent.
Cookie SettingsAccept All
Manage consent

This website uses cookies to improve your experience while you navigate through the website. Out of these, the cookies that are categorized as necessary are stored on your browser as they are essential for the working of basic functionalities of the website. We also use third-party cookies that help us analyze and understand how you use this website. These cookies will be stored in your browser only with your consent. You also have the option to opt-out of these cookies. But opting out of some of these cookies may affect your browsing experience.
Necessary Always Enabled
Necessary cookies are absolutely essential for the website to function properly. These cookies ensure basic functionalities and security features of the website, anonymously.
Functional
Functional cookies help to perform certain functionalities like sharing the content of the website on social media platforms, collect feedbacks, and other third-party features.
Performance
Performance cookies are used to understand and analyze the key performance indexes of the website which helps in delivering a better user experience for the visitors.
Analytics
Analytical cookies are used to understand how visitors interact with the website. These cookies help provide information on metrics the number of visitors, bounce rate, traffic source, etc.
Advertisement
Advertisement cookies are used to provide visitors with relevant ads and marketing campaigns. These cookies track visitors across websites and collect information to provide customized ads.
Others
Other uncategorized cookies are those that are being analyzed and have not been classified into a category as yet.
SAVE & ACCEPT

Register For This Site.

Please enter your username or email address. You will receive a link to create a new password via email.